On 16th December 2013 we had a video shoot for my business Kerry O’Brine Womens Wear.

We had a couple of things go wrong for instance last minute model cancellations and running late but on the whole these things did not have a major impact on the day. In fact, the day was a huge success.

We drove to the studio at Green Lens Studios, running a little late as the traffic was horrendous (9am is rush hour but seriously no one was rushing anywhere – we weren’t moving at all!!!). We arrived and our filming expert of the day was already there getting set up. The atmosphere was nice and chilled and we were welcomed by Green Lens Studios with a fresh cup of coffee.

After the model cancellations we were left with one model; Lilly. Lilly was better than we could have hoped for and it turned out perfectly as she was super fantastic and looking back now I wouldn’t change it.

For hair styling we had Danielle who is so quick and great at creating hair styles. Within a blink of the eye Lilly’s hair was up in a beautiful bun style.

Our makeup artist for the day Helen, did an amazing job at creating a very sophisticated makeup look. We did a couple of screen tests to check the strength of the hair and makeup. It’s amazing what the camera picks up on that the naked eye doesn’t see and vice versa! Helen ended up increasing the strength of the makeup with some fake eyelashes and stronger lip colour and Danielle increased the height of the hair.

Conal from Pavemar Productions understood exactly what we were trying to achieve with the filming and got straight into capturing Lilly on film. 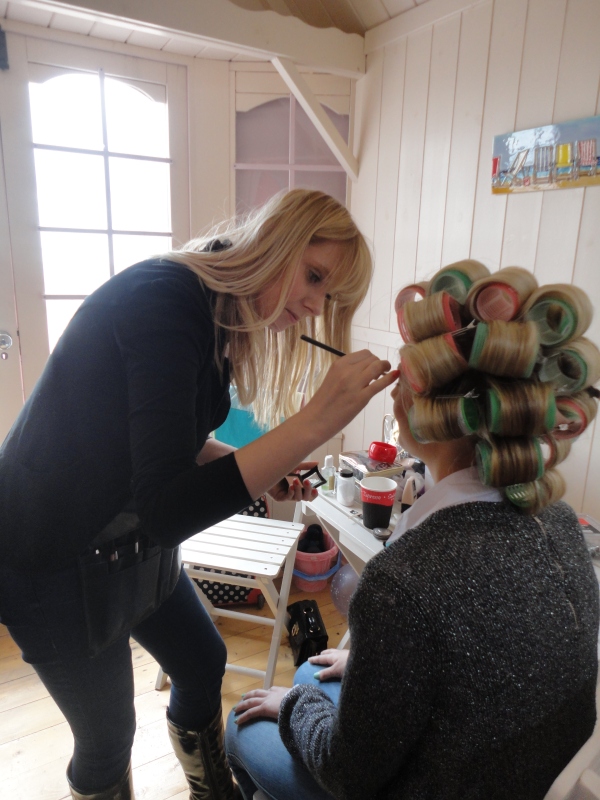 It was amazing to work with Tracy on the recent photoshoot for summer office wear.

Tracy and I were emailing back and forth before the shoot. I sent her some inspiration pictures and Tracy had some great ideas about the eye makeup and this was to be the focus of the makeup look

To complement the bright 60s eye makeup Tracy kept the lips a nude shade. We considered coral but agreed this would be too much and a nude lip would keep a bit of everyday reality to the look!

The nails were the first things to be started on the day which worked out well, they could then dry whilst the hair was put up in rollers. The nails were done in a great minty green shade which was the perfect summery pastel shade for the look!

A close up on the final makeup for the shoot! 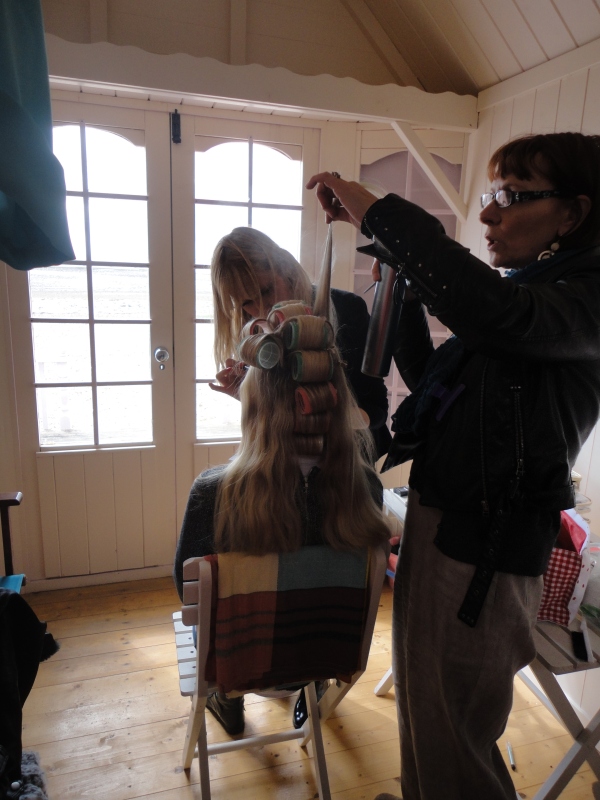 Hair stylist Julie in action on our recent photoshoot:

You can see the first job of the day was putting the hair into rollers – giving the hair some extra volume and wave to start with.

Once the rollers came out Julie was on to the back combing! This was amazing. She used a little special comb and the effect was incredible. I have always started backcombing but I think it takes confidence in knowing what you’re doing to back comb hair to this height!

Due to the very very very windy weather we had to contend with on the day, I think Julie used a huge amount of hairspray!

So here you can see where Julie is starting to create the shape of the style:

and here is the first finished style for the photoshoot:

(This hairstyle works with with long hair but I think it could equally work well for medium length hair.)

Julie then slightly changed and adapted the hair throughout the shoot. Here is a peak at one of those here: 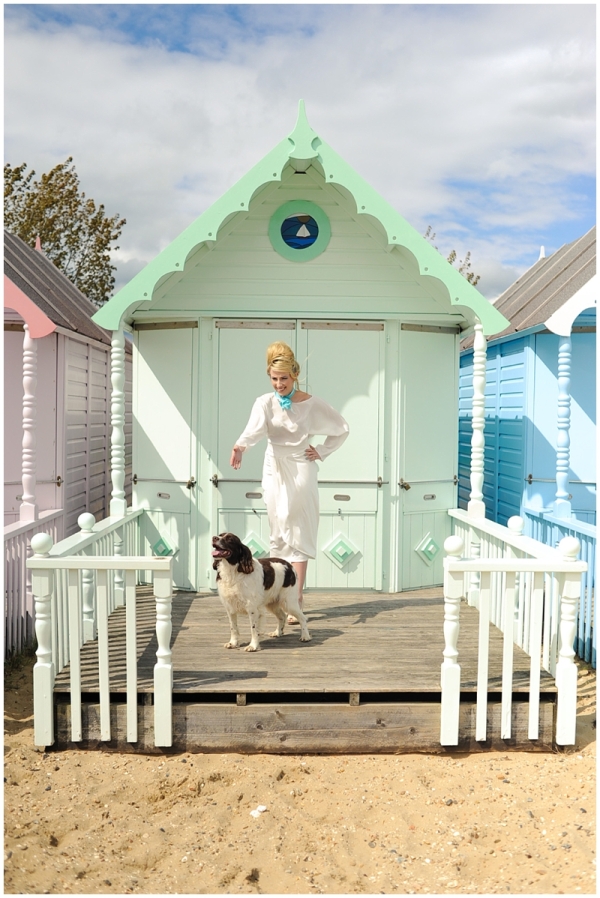 On Wednesday a lot of hard work and preparation came together in the form of our photoshoot. I love photoshoots they can be nerve racking but also exciting because it’s your vision coming together.

A crew of five of us got together for a photo shoot of my office summer wear collection which includes blouses, dresses and a skirt.

Sometimes the best bits are the behind the scenes shots, the goings on and the conversations you have with the team!

This shoot was no exception…. we had a random dog, difficult weather, one tiny room to prepare in and a deadline to get off the island before the tide was high!!

Whilst the model was having her hair and makeup done, the photographer Kerrie and I discussed the photoshoot. It had to be a military operation due to the weather. The huge amounts of wind meant it was going to be really difficult to stay outside for too long before the model got chilled to the bone, we had to move quickly!

We decided on the order of the five looks, each of their backdrops, the props and accessories, the poses we wanted and the angle of the shots!

I had a fight with the wind! The wind won and turned the umbrella inside out, it took two of us to turn it around (after they’d all had a good chuckle at me and taken some pics of me struggling!!). 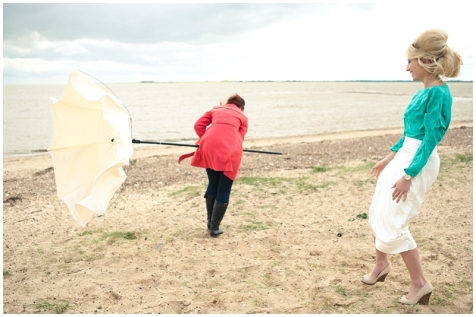 We were visited by a dog who decided he wanted to be involved and join us in the beach hut and be in the photos!! I think he owned the beach, what a poser!

We were shooting on an island and twice a day there is high tide. We got through all the shots and had to rush off before the tide was high! It was a bit of a crazy end to the day!

So here is the second little behind the scenes makeup video for you. Suzie Love worked hard putting together the makeup look for the Kerry O’Brine Womens Wear Silk Line fashion photoshoot. Although the makeup was inspired by the 1920s and needed to be strong in the photos we wanted to make sure it would come across as a realistic look for a professional woman during the working day.

Suzie and I had a little chat about the look we were going for:

Kerry “For work, you wouldn’t do more than that if you were doing it yourself”

Suzie “If you were going for a dark lip, you wouldn’t necessarily go for a strong eye for the day”

Suzie “Yes, it’s going to be a mix between the two”

Whilst making the women’s Silk Line fashion photoshoot I took some footage of behind the scenes. I have finally found the time to put it together! This first one is on the hair. Suzie Love describes how she will put together the look for the day. If you have seen the fashion photoshoot here you will see a variety of different hair looks. Using my 1920s inspiration combined with the modern professional woman’s day to evening lifestyle Suzie changed and adapted the hairstyle through out the shoot.

It’s nice to see a professional fashion hair stylist in action and I have picked up some tips for how to use the comb and spray when putting in the rollers which I may use myself!

The next little video is of the makeup!

I’ve been tweeting and shouting about my new webpage all morning!! I think you’ll find it looks great. I wanted to show off the variety of shots we took demonstrating the lifestyle of the Kerry O’Brine woman! Each picture has a different dress featured and is in a different location.

This was a change from my previous photoshoot which was a simple grey background. I wanted to give more of a lifestyle feel demonstrating the day to evening flexibility that this new collection offers.

You can see the hard work that the make up and hair stylist put in; as the location and time of day changes, as does the hair, makeup and styling. I think the location The Salthouse Harbour Hotel really was perfect and helped create the look I envisaged.

The hair and makeup were inspired by the 1920s but we didn’t want to go down a theatrical route. Keeping in mind these dresses are for business women the hair and makeup had to have a modern everyday easiness about them.

The dresses look great on their own and to show this off, in the shoot the dresses were styled with a light touch; some nice shoes, a necklace and tights.

Once a clothing photoshoot is over, the hard work continues!! This week my studio has been a hive of activity but in comparison to before, it’s all been on the computer. Writing for the website, designing invitations, designing website layouts, choosing pictures, editing….the list goes on.
Jobs that you think will be quick, bring up questions and then those have to be dealt with.

In addition I’ve been in meetings about social media, marketing and events. So many logistical decisions to be made!

In terms of clothing production, some pieces will get into full swing next week!!! That flame coloured blouse from the previous collection is making a come back. It was very popular. After wearing it myself ( see me wearing it here)I realised why and I had to have some more created in different colours for 2013!!

I have to say this shoot was one of the most relaxed I’ve ever been on. Everyone arrived early, organised and ready to go!!! We all got on well and understood what each other had in mind! 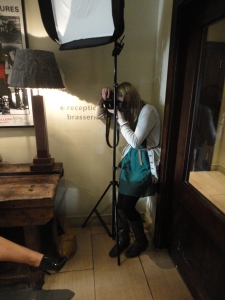 You can see a sneak peak of my first picture on facebook and also on the website.